Episode 5 and 6 of Empress of China 武媚娘传

Empress of China Episode 5 starts off with RuYi, Xu Hui, and the new Empress WenDe lookalike Zheng WanYan standing up for a servant, Wen Niang (who becomes important later). Wen Niang is bullied by Xiao Chang into getting some make-up for her (my chinese isn’t that great) but Wen Niang doesn’t know what or how to, so to help Wen Niang out, RuYi, Xu Hui and WanYan all go to the candles at night to gather some… I’m thinking that it’s wax or something to make lipstick or something – I really don’t know.

And below is a screencap of them gathering the needed materials. WanYan is spotted by the Emperor, whose head is actually on the right on that screencap. He immediately gets a eunuch to summon her to stay over at his personal palace that night (his personal palace is called Gan Lu Dian).

Gathering some wax… I think.

RuYi decides to go to Cheng Qing Dian to copy Nu Ze, Empress WenDe’s work, because she feels sad that being a concubine in the palace is so unstable, and that anyone could be replaced at anytime.

At the same time WanYan is enjoying an amazing bath because she thinks that she’s going to sleep with the emperor.

Obviously she’s wrong because the whole purpose of the drama is seemingly to make all characters hate RuYi, while RuYi remains innocent and kindhearted. I’m so bitter because I had high expectations for this drama but why is RuYi so bland and predictable? But moving on. The Emperor conveniently decides to visit Cheng Qing Dian that night and overhears RuYi talking about him. This is another encounter that makes the Emperor fall in love with the innocence of RuYi more – trust me, I watched ahead and there are many encounters. They really lack the chemistry though. The whole time it just seems very forced, like their obsession with each other came out of nowhere. 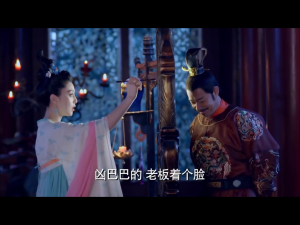 RuYi talking about the Emperor with only a mirror separating them

The Emperor consistently does this for a few nights, where he gets WanYan to go to his personal palace, but they don’t sleep together, and he secretly visits RuYi.

The dot on the forearm of all the concubines mean that they’re still a virgin. This has always confused me – I even googled it. So apparently it’s marked with blood – gecko blood, but it doesn’t wash off. It stays on like a tattoo until you’re no longer a virgin. HOW?

As we know, WanYan has been primed by De Fei’s brother to come back to seek revenge on the Emperor for killing his whole family. So WanYan has been groomed to act exactly like Empress WenDe, but instead of impressing the Emperor, he grows to find her unsettling.

So one night, while WanYan is at the Emperor’s personal palace once again, the Emperor once again goes to Cheng Qing Dian to find RuYi. This time, instead of spying on her, he actually speaks to her. Again, they have an encounter where he falls more in love with her, because she takes him outside to show him the wonders of the palace (this part is so cheesy and lacking chemistry that it’s not very mention-worthy). The Emperor and RuYi talk, and RuYi mentions that it’s not fair to WanYan if he treats her like Empress WenDe, instead of WanYan herself, because they’re two different people, and treating WanYan like Empress WenDe is cruel.

Xiao Chang finds out that WanYan hasn’t been sleeping with the Emperor even though she’s summoned to his palace eery night. She confirms it by lifting up her sleeve to see that ‘virgin red dot’ on her forearm. She reveals that it’s all RuYi’s fault. The Emperor also stops summoning WanYan to go to his palace as well, because of him and RuYi’s conversation.

Great, so back to the main theme: everyone hates RuYi.

Episode 5 ends with WanYan testing RuYi, to see if she would lie about seeing the Emperor at night.

So RuYi ends up lying and saying that she never saw the Emperor, which makes WanYan hate her. So, obviously when you hate someone back in the olden days, you set off to murder them of course. She sets up a meeting with De Fei to ask her to help with the murder of RuYi. 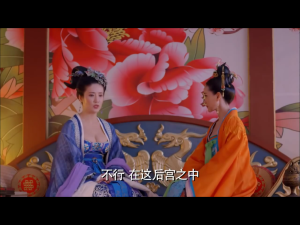 WanYan receives a murderous pot – yes, a pot designed for murdering someone! It has a switch where the red side is the normal wine, and the black side is the poisonous wine. She sets up a lunch with RuYi to murder her. 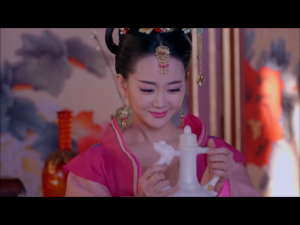 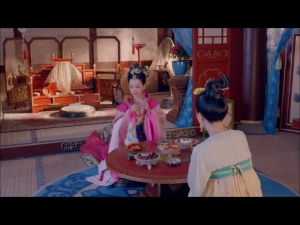 Suddenly during lunch, WanYan begins convulsing. She was tricked. Blood comes out of all possible holes. 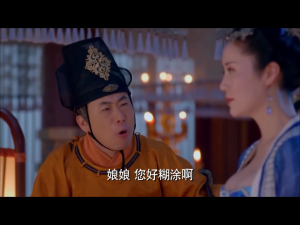 Unfortunately, RuYi get’s framed for it. Since the story is all about how everyone hates RuYi, and how RuYi is the underdog, she gets tortued by Wei Fei. She refused to confess to the crime. Luckily, Xu Hui begs for Shu Fei to tell the Emperor, and the Emperor comes in time before they killed RuYi.

The episode ends with RuYi being released even though she’s a suspect. She’s so sad that the emperor didn’t stand up for her that she decided to go to Cheng Qing Dian.

So far I’m watching for the sake of having something to watch during my morning runs on the treadmill but RuYi doesn’t have a lot of redeemable traits for me other than being attractive. All she sees is the Emperor. If she’s so intelligent like how they describe in her the drama, then how come she can’t see the bigger picture? She’s merely a concubine out of 3000 other ones. I know I know it’s a drama, but I feel like her fixation on having his love is so dumb and much too innocent (maybe I’m just cynical). I’d much rather it be truer to the historical story that her need for the Emperor’s love is from her ambition and her power-hungry nature.

8 thoughts on “武媚娘传奇: The Empress of China Episode 5 and 6 Recap/Review Synopsis”