The beginning episodes are pretty laggy so I’m only including the plotline, but I’ve always wondered how old she’s intended to be at every stage especially since she’s supposed to end up with the Crown Prince. This isn’t a spoiler because it’s actually in history. By now she’s only 15 years old (the Emperor mentioned that they met exactly one year ago, and she was only 14 when she entered the palace), which makes more sense when she meets the 12 year old ish (plus or minus a few years) Li Zhi. Since their age gap isn’t that big I think their love story isn’t that weird.

Interesting trivia, did you know Zhang Ting (Wei Fei) is 44 years old?! She looks so gorgeous!!! And also she actually played Wu Zetian once before in a drama? I wonder how she feels to play Wei Fei now rather than the main lead, but I mean, she is working with Fan BingBing right? 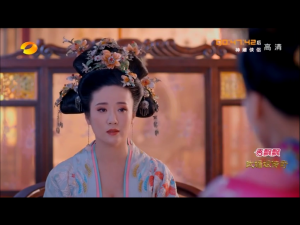 The episode starts with Wei Fei confronting De Fei about seeing a servant from Shu Fei communicating with De Fei’s servant. Wei Fei thinks that they’re plotting against her. De Fei admits to it – she’s going to get one of her servants to admit to being bribed by Wei Fei and tell the Emperor that Wei Fei intentionally wanted to ruin Liu Li Yan. De Fei asks Wei Fei what she can offer her instead, if she really wants to save herself.

Wei Fei reveals that she has more power than De Fei had expected in the military, and that even if De fei accuses her of such things, she wouldn’t be affected because the Wei Family has such high powers in the country. De Fei realizes she’s made a big mistake, and is convinced by Wei Fei to be on her side.

De Fei goes to the prison to where her servant is, and tells her to write two letters: one, that’s accusing Wei Fei of ruining Liu Li Yan, and one that’s saying that Shu Fei had forced her to write an accusing letter in order to frame Wei Fei. The servant would then commit suicide so that no one could question what she wrote. The first letter is directed by Shu Fei, and the second letter is directed by Wei Fei. This was a really sad scene because De Fei’s servant has been with her all her life, and now she had to commit suicide. Shu Fei receives the first letter, and Wei Fei receives the second letter. Now the tables have turned, instead of trapping Wei Fei, it’s trapping Shu Fei – so complicated I know! 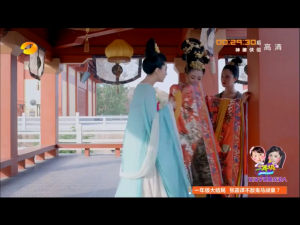 While walking to tell the Emperor about the first letter, Shu Fei is given a note by De Fei to tell her about Wei Fei’s trap. I really don’t get why she just didn’t tell her that earlier, but De Fei later justifies it saying that it is to make Shu Fei trust her more. Hell I would not trust you after you almost trapped me into something like this – what if I didn’t receive the note or it was intercepted?! But, drama.

Am I the only one that noticed that she puts on circle lenses after she leaves the Emperor’s palace?! She has them on for most the drama but she has them off in this one scene with the Emperor, and in the next scene where she’s back at her own place they’re on again. For a 48 million USD budget you’d think she’d keep some continuity. So Shu Fei and Wei Fei are at the Emperor’s palace, and Shu Fei says that it’s solely the servant’s fault, instead of accusing Wei Fei. This is one of those instances where it doesn’t add to the plot but it’s like a ‘filler’ to add to character development. Now we’ve just gone in full circle. 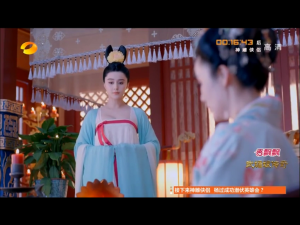 The nosey and innocent RuYi goes to visit De Fei. Even though De Fei is presented to RuYi as a villain all along, RuYi still wants to ‘get to know her’ and ‘be her friend’, being the typical drama-esque female lead – innocent and clueless. I feel like this production could have done so much more to make RuYi more interesting, but they didn’t.

Anyways, the visitors are still in town from Liu Li Yan, and they have this competition to what it looks like to be polo. RuYi, Xu Hui (who is finally awake from the poison), Shu Fei, and Wei Fei get to go. De Fei is put to ‘house arrest’ because of her servant ruining Liu Li Yan.

So cute! We see the grown up version in episode 50ish 😉 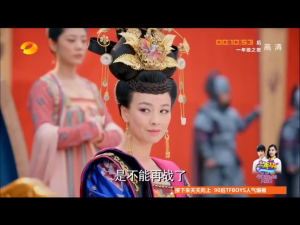 So Wu Wang, who is Li Ke, who won the prince fighting competition in the earlier episodes is now appointed ‘captain’ of the polo games, against the visiting guest prince. He gets really hurt during the game, and the two parties have a dispute on who wins! The Tang Dynasty party says it’s a stalemate, while the visiting party insists they won. So, one of the guest asks for someone the pick the most beautiful flower out of all the flowers in the garden. If unanswered, the visiting guest wins the polo game. 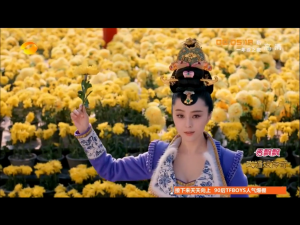 So supposedly it’s supposed to be a trick question. Since beauty is subjective no flower can truly be the most beautiful, especially amongst hundreds. So obviously it’s another round of ‘situations to fluff up the female lead’ again, as we saw in the previous episodes, and RuYi volunteers to pick the most beautiful flower.

She proceeds to burn the rest of the flowers, so technically it could only be the most beautiful one.

Now the guests ask to see the Emperor’s archery skills. The guest prince shows that he’s pretty good at it so the Emperor’s gotta take the challenge. Now another round of ‘situations to fluff up the female lead’. RuYi volunteers herself – flower in mouth, on the horse.

While riding at a high velocity, the Emperor manages to shoot the flower in half while it’s in her mouth.

RuYi truly impressed the Emperor, so he gave her a new name – Mei Niang, which translates to beautiful woman. I’m so in love with the headdresses that I’m just going to include a whole gallery of headdresses from the Polo event: 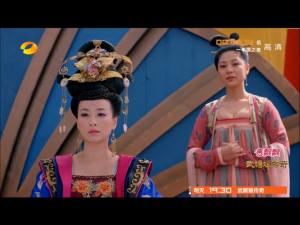 The costumes are so gorgeous!

They celebrated the victory afterwards – and RuYi and the Emperor stepped out alone to enjoy the fireworks. They headed to Cheng Qing Dian during their romantic walk.

Suddenly they’re approached by a servant – turns out he’s an assassin. RuYi bravely and dumbly grabs the dagger but adds on to the list of ‘situations where the female lead is so amazing’. 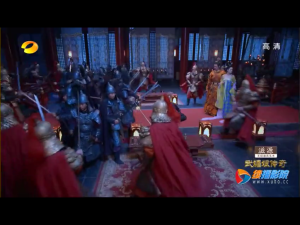 A bunch of other assassins rush in – and jokes on them – the Emperor was prepared. His guards were just waiting outside and decides to break through the windows to kill them all. By now the Emperor knows that his son and General Yin are rebelling against him.

At this point De Fei Finds out that her son and brother has tried to assassinate the Emperor, and are both rebelling against him. She also knows that they’ve failed to assassinate them, and the only possible outcome from this is that the Emperor will kill both of them for treason. Between son or husband, most mothers will pick their child – so the only thing for her to do is to kill the Emperor. 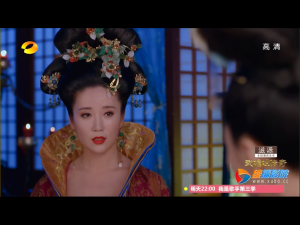 So De Fei goes to visit RuYi to offer some food that she personally made. On top of that, she made a type of soup that is especially for an older man. Upon hearing this, RuYi knows that the Emperor would be most suited for this, and being the nosey person she is, she decides to go to offer it to the Emperor in order to mend his relationship to De Fei. The Emperor nearly eats it, but smacks it out of her hand in time when realizing it was made by De Fei. It was poisoned!!! 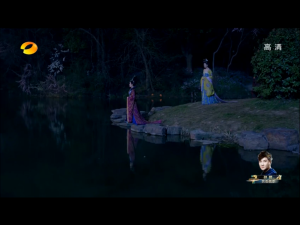 RuYi goes to find De Fei by a small pond. Yes, a pond. She explains herself (which I get it, you would want to save your child), and she commits suicide. It’s a pond. I guess you could really drown yourself if you really tried.

That’s the end of the important parts of the plot – now I’m going to just include  a gallery of Wei Fei because her costumes are so elaborate and her jewelry is so beautiful. I’m creating a design with recreating the the different intricate headdresses so there will be more screencaps of this since they’re for my reference too as well. 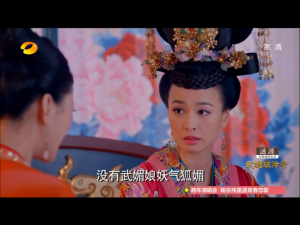 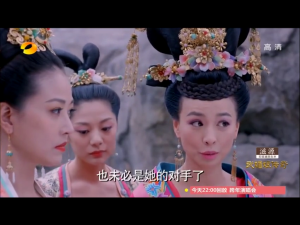 I created a post earlier about episode 60 trailer. I can’t wait for tomorrow’s episodes – it’s finally picking up!!!