Episode 1 of Empress of China 武媚娘传奇

Fan Bingbing stars in Empress of China as Wu RuYi. The episode starts off in a beautiful scene where the cai ren first enter the palace. Cai ren are the lowest ranking concubines but these cai ren still come from very wealthy and affluent families (so they’re pretty much the socialites of the olden days). 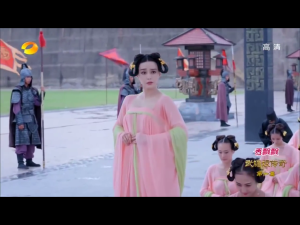 Did anyone notice that Bingbing’s eyebrows were uneven throughout this whole scene?

Wu Ruyi enters the palace at 14 years old. Knowing the background history of Wu Zetian, I really wish that they actually included some stuff about her before she entered the palace. Apparently Wu RuYi was very intelligent, and was well-educated by her father. History has it that she entered the palace ambitiously for power. She’s depicted to be quite innocent in the drama (at least right now) which I found was really disappointing, since it’s really typical for the female protagonist to be ‘innocent’ and ‘simple’. I tend to like very intelligent female leads, instead of the ‘pure’ and ‘naiive’ ones, so I hope she doesn’t stay this way for long, or else it’d be pretty annoying.

In this episode we meet several key characters: Huang Shang – which is the king. I forgot to screenshot his face. Again, I don’t know if I’ll really be into this drama because I really love handsome male leads, but there were none in the first episode.

We meet her best friend, who I recognize from a lot of dramas. She plays a pretty typical role in the drama – the stereotypical obedient soft-spoken best friend to contrast RuYi’s strong headed behaviour. These typical best friend roles only have two possible endings: she either dies, or she turns evil against RuYi. I will bet money on that.

Then we meeting Xiao Chang – another typical antagonist character. Rude, spoiled, comes from connections (she is the niece of Wei Fei, who we will introduce in a bit). Her acting is actually really annoying, to show off her rudeness. I really do hate seeing her, not because her character is so mean, but because her acting is awful.

Up until this point, we have just been seeing how the new cai ren have been adapting inside the palace. In this scene, all of the cai ren meet the beautiful Fei which is like, pretty up there in terms of concubine status. We find out Huang Hou which is the main empress/wife is dead, and we quickly figure out that Wei Fei, who is in the pink in this picture, is conniving and evil. That being said, all of the scenes are so beautiful in here. They said that this was the most expensive drama ever made by China. I definitely believe that – the attention paid to the set, and the quality of shots is amazing. Also, their costumes/outfits are so intricate and gorgeous. I personally pay a lot of attention to jewelry and gold accessories, and their head dresses and jewelry are so beautiful. Interestingly this drama was produced by Fan BingBing Studios. I wonder she had part in writing the script because they keep calling her beautiful throughout this episode. Hm.

Finally something happens before I decided to drop the drama and move on to something else: One of the Fei intentionally falls and suffers from a miscarriage. It is obviously some pre-concocted plan by Wei Fei and Xian Fei Fei (suffering from miscarriage) to frame this other Fei (sorry I forgot the name, but I’ll pay more attention next time). RuYi dumbly steps in to say she saw the whole thing and that Xian Fei fell on her own. Which I thought was actually pretty dumb, but who care what I think, right? It’s such a set up to get everyone to hate her, which a lot of characters do by the end of the episode. RuYi seems reckless and has a straight forward attitude but her character seems so unrelatable and one dimensional. But I’m sure it’ll get better when she slowly becomes the power hungry Wu Zetian.

In this last scene we find out that yes, Wei Fei and Shu Fei did plan to do this. Shu Fei had to do it because Wei Fei was threatening her dad’s fate as a general. In the end, Wei Fei revealed that she caused two other miscarriages of Shu Fei by pretty much poisoning her. Wei Fei says, “If I can’t have it, you can’t have it either”, meaning children. Shu Fei, upon hearing this and feeling so helpless… well, she will probably take her life.Wei Fei is very good at acting and her character is really interesting. She’s insecure and calculating at the same time.

So far I’m not pulled in yet, but I’ll keep watching for the sake of the pretty scenes.