[You Done Goofed]: Defined on UrbanDictionary as “When you have committed an act in which “consequences will never be the same again”

Cheng Qian, you really done goofed. I mean, in the previous episodes, he already committed crime of lying to the Emperor – which is a very serious offense. Now… he attempts treason on the Emperor?! But fails?! You done goofed man, you done goofed.

I would just like to add that Cheng Qian looks very handsome and normal in real life:

But in the drama, he just looks so weird. It’s like his face is too pointy or something. I think it’s because his face shape is exaggerated with the olden day hair style – it’s definitely not his best look. After I googled him, I was pleasantly surprised that he’s actually pretty good looking in modern attire.

The episode starts with Li Zhi and Mei Niang chatting about Cheng Qian’s predicament after lying to the Emperor. Li Zhi was considerably more handsome back then, and I think I know why. They actually put a lot of eye make-up on him in the later episodes to create the illusion of more deep sunken eyes and and wrinkles. 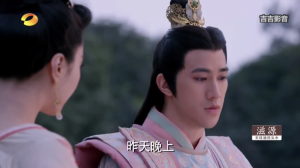 Teacher Wei is consulted on what to do with Cheng Qian. Teacher Wei has always wanted to raise Cheng Qian up into Emperor’s position.

I mean… what if he died earlier? That would definitely wreck the plans right? What if the Emperor decided the next day? How did they figure out the timing?

But, we are still playing the game “Let’s get everyone to hate Xu Hui” so obviously Xu Hui conveniently catches Mei Niang writing this note (which literally would take less than 2 minutes to write, but Xu Hui somehow catches it). Xu Hui secretly copies the note, and intercepts the note to replace it.

She writes the opposite – black means he’s still crown prince, white is that he’s replaced. 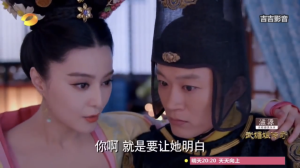 There was this very cute scene where Mei Niang treats Rui An like a ‘bro’ and gives him girl advice. Rui An has to be the cutest eunuch in the history of eunuchs in the royal castle.

Wen Niang confronts Xu Hui about framing Mei Niang. She was dumb enough to be all self-righteous to try to convince Xu Hui to turn herself in, or she will. This woman has framed her best friend and you are threatening her?! You’re just asking for it. So obviously Xu Hui picks up the candle holder that was engraved by Rui An and kills Wen Niang with it. Conveniently, because, drama.

This scene was so sad because Rui An was professing his love for her outside. 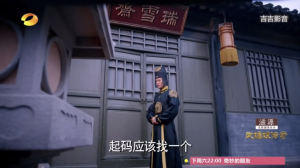 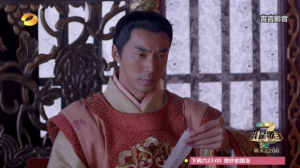 The wrong note gets into Cheng Qian’s hands. Meanwhile, General Hou comes back from a successful war, and celebrates with the Emperor. They both pretend to be drunk. General Hou ‘drunkenly’ stumbles onto Cheng Qian’s personal chambers. This was actually all arranged. General Hou hates Li Ke, because he is the grandson of the previous dynasty’s Emperor, and so General Hou sees him as a mutt, a non-pure bred, a muggle, if you must. He can’t stand to see anyone else except for Cheng Qian become Crown Prince or Emperor. 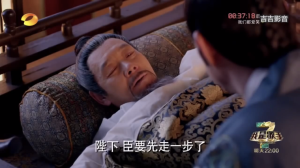 This was definitely not a fool-proof plan. Just saying.

But the Emperor tells him his decision… 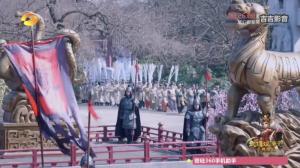 But that doesn’t matter because we are still playing the “Let’s get everyone to hate Xu Hui” game, so Xu Hui has to jump in and mess everything up. Not only does she replace the note to Cheng Qian with the opposite meanings, she also tells the Emperor that tomorrow, Cheng Qian will commit treason, and Mei Niang is involved. 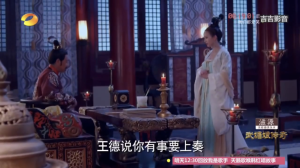 Ok, so how does this work? So what was the purpose of switching the meaning of the notes?

First of all let’s assume that she wants the Crown Prince to rebel, because she wants Mei Niang to be in trouble, how does she know that the Emperor was going to keep him as Crown Prince? I mean, only if she knew beforehand that Cheng Qian would stay Crown Prince, that would serve a purpose in switching the meaning of the notes right?

Or second theory: she wants the Crown Prince to rebel either way. He will rebel if he doesn’t get Crown Prince either way, so if the Emperor decides to keep him, he’ll think that he’s being replaced (because of the mixed notes). If the Emperor decides to remove him, he’ll think that he can stay… until the announcement, where he’s officially demoted as Crown Prince. Then, he’ll still rebel, right? I might, I thought this might be, because Xu Hui had a whole monologue saying that the only way for a man to love you, is to remove all his power. Maybe she wanted to strip the Emperor of all his power…

But then… why did she tell him that Cheng Qian was gonna rebel?! Now we’re back to our first theory… What’s the point of switching the notes?!!?! 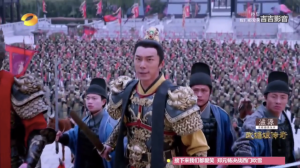 Finally, we get to this scene where Cheng Qian ‘dun goofed’. He tries to get the Emperor to resign.

Zhang Feng Yi does such a good job of playing the Emperor in this drama. Li Shi Min is known as a ming jun, which is one of the Tang Dynasty’s most respected and intelligent Emperors. Li Shi Min is so suave and cunning in this drama. Even though I’m not attracted to Zhang Feng Yi at all, he definitely comes off as a dominant alpha male in this drama. During the takeover scene, he even jokes, “Cheng Qian, are you here for a morning meeting? You are definitely my blood-related son” – because Li Shi Min once did this to his own father at Xun Men gate. Next few episodes will cover Cheng Qian’s consequence for committing treason.