ALL THIS, BECAUSE OF AN ASSUMPTION

Two more days left until this drama ends!!! The producers cut out so much for some reason, so it’s 40 episodes instead of 44. I can name so many unnecessary moments that could’ve been cut out instead of speeding up the ending, but whatever. I don’t even mind 44 episodes anyways – I don’t like how they’re sacrificing quality over quantity.

After Ming Zhu finds out that she’s pregnant, she takes abortion medicine – an abortion is induced on her, and blood starts streaming down her legs while she writhes in pain. This is was so sad to watch while she was crying out in pain.

Meanwhile on Jin Xiu’s end, she finally decides to be stop being a parasite on every person that she meets, and decides to leave the Wang family. She camps out with a bunch of villagers, when suddenly the villagers are attacked. Suddenly Ying Dong shows up to defend everyone (and this is not quite explained why he’s on a horse) but this is when he’s reunited with Jin Xiu.

They try to portray Ying Dong in a handsome light with slow-shots and angles, but the producers fail miserably as we have not forgotten about his childish and immature behaviour a few episodes back. 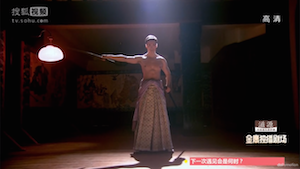 We get another scene of Long Yi ‘blowing off some steam’ again, except that it’s more in the literal sense, where he has to take off his shirt. 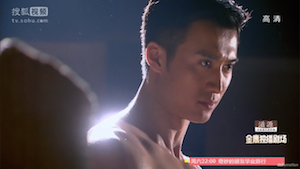 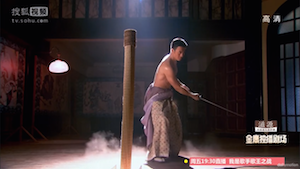 This scene might look familiar because he’s done this before to release some stress, where he literally takes one swing at a log. Yes. This de-stresses him. Sigh. Let’s move on. 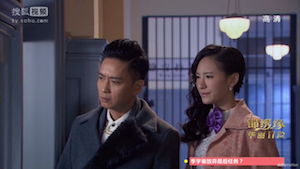 Xiang Han Chuan trick Ming Zhu to the hospital so she can receive care to get rid of her addiction to opium.

I officially forgive this whole drama of its sins because of these multiple shots of the puppy. The puppy is brought back because Zuo Zhen is just reminiscing and missing Jin Xiu.

Jin Ling tries to take advantage of this opportunity of the lonely Zuo Zhen (by now, she’s left for around one to two years), and convinces Tang Hai to let her go inside.

She helps the drunken Zuo Zhen to his bed, and execute what is known as non-consensual sex, otherwise known as rape.

This needlessly graphic scene was so disturbing ok? If I wanted to watch some graphic stuff I would turn on Netflix or watch some North American movies ok?! LET’S KEEP IT PG!!! At one point Huang Xiao Ming even kisses the top of her boob, which I’m like:

Ok needless to go so far for a drama ok? 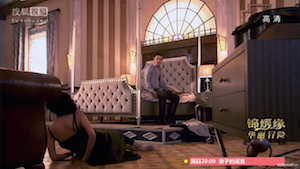 Luckily at this point, the graphic almost-sex is interrupted with Zuo Zhen realizing that he wasn’t kissing Jin Xiu, but Jin Ling.

He aggressively pushes her onto the floor which is kinda sad and degrading for her, as that’s he rejected her in such a mean and direct way, but I mean, she did try to rape him, right? Jin Ling starts crying and Zuo Zhen tells her that he’ll stay lonely forever if Jin Xiu doesn’t come back. 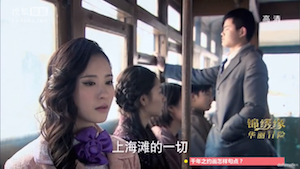 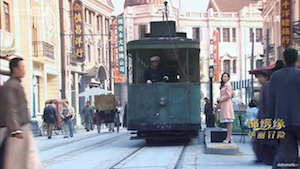 Jin Ling, disappointed and all, decides to leave Shanghai while Ming Zhu’s still in rehab.

Long Yi finds Ming Zhu in rehab, and pretty much threatens her and strangles her. He threatens to kill her unless she starts smoking opium again.

To save her own life, she becomes readdicted to opium. 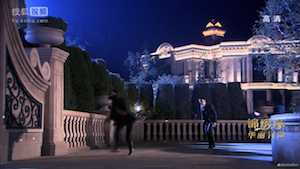 Jin Xiu returns to Shanghai with Yin Dong. The first thing that Jin Xiu tries to do is to kill Zuo Zhen. The editing and cutting was so bad – in one moment she was in the house, and the second, they’re fighting and he’s running after her outside in the dark.

She does a lot of things, I mean, she leaves her lifelong love, her husband, she loses her baby, she leaves for two years… And now she’s trying to kill her true love again. That’s a brave move… 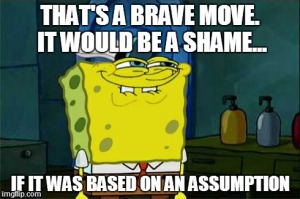 Jin Xiu follows Zuo Zhen, meaning to kill him. She finds that he revisits the place where he bought her red bean congee, and that he’s been going every day since she’s been gone.

He even visits the place that they lived when they had to live under the radar in poverty. She hides very conspicuously behind the door.

At last, Jin Xiu follows him to the wooden horse that he had carved and made for their unborn child.

This was such a sad moment for me… because they were such a happy family, and their child was so needlessly taken away from them. Sigh.

After she thinks that Zuo Zhen had left, she sadly entered the room and looked at the wooden horse.

At this point Zuo Zhen very cornily enters the room and hugs her from behind. He asks her all the questions that you’d ask when your love has been gone for two years “Where have you been, I’ve missed you” etc., etc.

She turns around and acts like such a big bitch. I mean, we’ve seen how much he’s missed her, and have done for her… And this is how she reacts to him. She runs off again and he stands there, shocked. 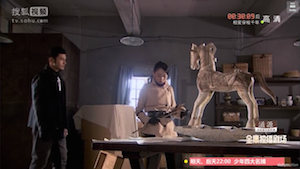 The next day she returns to the same place again, and somehow Zuo Zhen knew she was going to be there (trust me, he randomly knows where she’ll be numerous times hereafter, and it’s completely unexplained). 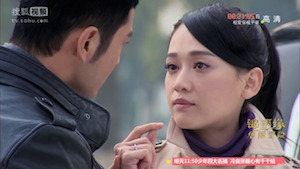 Again, she acts like such a bitch to him – I mean how could you treat someone else like that without getting a direct response? She intentionally says hurtful things to make him sad, by telling him that he has no business over her, and that she’s married to Ying Dong now. 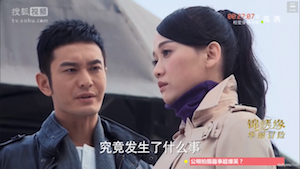 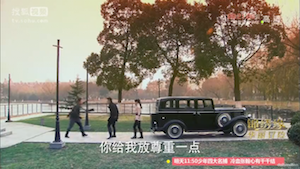 It’s revealed that Zuo Zhen has found out what Jin Xiu has done over the past two years through investigation (magically, this is done very easily after she comes back, right?).

Turns out Jin Xiu has joined the Patriotic Group while she was gone with Ying Dong, because there was one time that the village that they were living in got ravaged by Japanese soldiers. Ever since then, she’s been training and acting as one of the Patriotic Group’s members working against the Japanese soldiers. The main reason why Jin Xiu and Ying Dong came back to Shanghai was to find one of their missing members, and… killing Zuo Zhen was just a side mission. 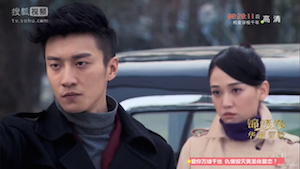 Ying Dong shows up to ‘defend’ Jin Xiu and it really pisses me off. Zuo Zhen has protected and helped Ying Dong so much, from being locked up by the police commissioner, from helping him with the race track, and protecting him afterwards, all up util Ying Dong left for Shanghai. Now he has the audacity to pull a gun on Zuo a baseless accusation? I mean, after all that, he doesn’t even defend Zuo Zhen’s character in front of Jin Xiu, he decides to marry Jin Xiu and agrees to help her assassinate Zuo Zhen?!

What kind of bro are you?! Jeez.

He beats up the deserving Ying Dong, and throws Jin Xiu over his shoulder, which is one of the most easiest things to get out of and run away (because you can easily shift your body weight and you can just roll off and knock him off his balance at the same time), but obviously, she ‘can’t get out of it’ because common sense is lacking. 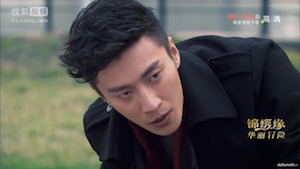 As he walks away with a woman over his shoulder at a glacial pace, and Ying Dong just stares on… like a wuss. 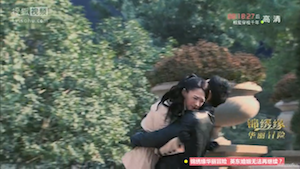 He locks her up at his mansion, and this happens again. She tries to escape, and literally he picks her up in a hug style, and she still can’t get away. Ok homegirl, you see how your legs are just flailing? You have to kick his groin with those legs. 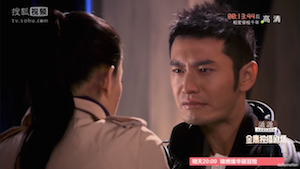 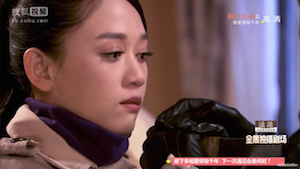 Zuo Zhen tries to confront her again about her departure two years ago. Jin Xiu is still evasive as f*ck for some damn reason – ok you left for two years and you tried to kill him on numerous occasion – why are you still acting so passive aggressive?!

Zuo Zhen asks her what he could do to make things right (like a typical man who doesn’t know what he’s done wrong), and she’s like “You can die” like an overdramatic girlfriend.

Zuo Zhen takes that as a literal invitation to stab himself in the chest, while holding her hands to push it in, challenging her to kill him.

Seriously I cannot stand how much dumb things happen and how this plot drags on because of a dumb baseless ‘assumption’.