OK. The plot has not really progressed today – and we’re still in the same place than before. I watched the trailer for episode 21 and 22 and it doesn’t look like things have progressed much at all, except episode 22 has a pretty interesting plot going on.

Pretty much it looks like Jiang Yu and Shao Tian are going to both enter a fabric dying contest and Jiang Yu will impress everyone with his beautiful dye-job. It looks like a good episode, but still, we don’t seem to look like that we’re moving anywhere with this drama.

Our episode starts with Jiang Yu showing little acts of care for Cai Hong – like spying on her and making sure that she eats, as she’s lost most of her appetite from being upset about the accusations about Shao Tian.

He cracks a little smile when he finally sees her take a bite.

The actress that plays Fei Fei has such nice bone structure – her nose is so straight and high.

Fei Fei confronts Jiang Yu about how he acts towards Cai Hong – even at this point he couldn’t deny it – it was obvious. Jiang Yu acts rudely to poor Fei Fei and tells her to leave him alone.

And even the servants are gossiping about Fei Fei and Cai Hong. Fei Fei is not actually part of the Jiang family – she’s adopted. Even if she marries well, she won’t marry as well as Jiang Yu too. Fei Fei overhears this, and this tips her over the breaking point, and she agrees to help Shao Tian.

They meet up and he tells her exactly what she has to do: steal him Cai Hong’s contract where she had sold herself as a servant.

If you keep watching – Fei Fei actually doesn’t actually betray Jiang Yu at any point in these two episodes nor does she actually go behind his back to do anything. I don’t even know why they included this part in the drama to seem like Fei Fei and Shao Tian are ‘conniving’ together – maybe just to antagonize Fei Fei? 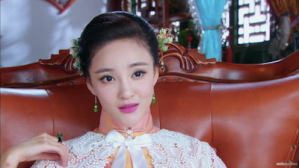 From an old worker and Lu Man, Shao Tian finally confirms that Papa Jiang was wrongly prosecuted and charged for the drug trafficking.

He confirmed this through three reasons:

1) Papa Jiang was the only one prosecuted for the drug trafficking – if there was truly a ring, there would be a receiver of the drugs, transporter, etc.

2) The records stated that there was 10 tonnes of tobacco – which was the perfect amount to cause a legal fine to fully bankrupt Papa Jiang but it would be impossible for Papa Jiang to have hid it in his one factory.

3) There were no records burning or destroying of these 10 tonnes of tobacco – it just disappeared.

Meanwhile, it’s a Chinese festival where we mourn and worship over our deceased loved ones. Apparently on this one day, the deceased come back and visit us for one day, so we prepare their favourite foods and all.

BTW Fei Fei’s bright blue and yellow dress is so adorable – it reminds me of Snow White. 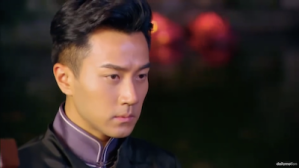 That night, Jiang Yu and Fei Fei go out to the river to set off lanterns, another tradition honour loved ones – and Cai Hong tags along just to set a lantern off to her own father.

Apparently Cai Hong has been falling for Jiang Yu, but I haven’t noticed until this very obvious moment where she’s staring at him admiringly. Her character isn’t very dynamic and I didn’t really see a gradual change of attitude or behaviour, but apparently now she’s in love with Jiang Yu. Maybe it’s her acting – I only realize that she likes Jiang Yu through this obvious point in the drama where she’s lost in his gaze.

Suddenly the dumbass Shao Tian thinks it’s a good idea to try to hijack the boat by using a lever to drag his boat closer to Cai Hong’s so that Cai Hong and him could talk about Jiang Yu is seeking revenge on her. Like seriously? This couldn’t wait 15 minutes when she was back on shore?

To make matters worse, apparently Cai Hong and Fei Fei have never had a physics class before or lack in the common sense department, because they decide stand up while the boat is rocking to try to stabilize.

I know you guys are 100 years back but I’m pretty sure you should have enough life experience that your stability increases proportionately to a lowered centre of gravity.

As a result of their dumbness, Cai Hong falls into the water (obviously, how else would we see how much Jiang Yu cares for her). 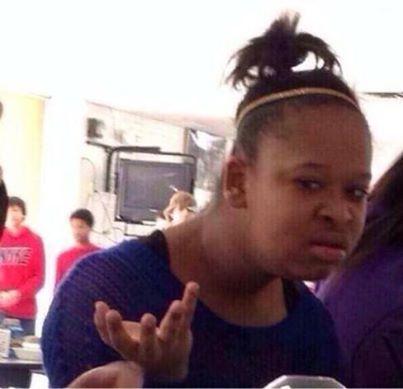 Ok if you’ve ever been in water before, or even understand the phenomenon of water, is that you’d float if you were in it. How she sank to the very bottom and managed to get tangled by meters and meters of seaweed and into branches is beyond me. Anyways, Jiang Yu bravely untangles her, and brings her up to the surface.

And he cares for her so sweetly. I swear, Jiang Yu could care for a freaking potato and I would still swoon. 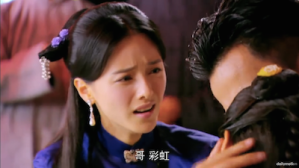 Meanwhile Fei Fei is chastising him for risking his life for his enemy’s daughter. 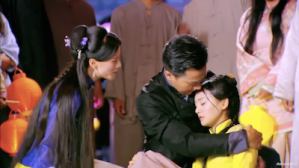 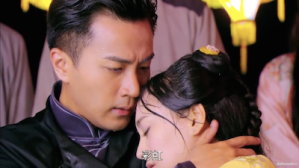 Shao Tian takes Cai Hong away and confirms with her that Jiang Yu has just been getting close to her just for seeking revenge. She finds out the truth about her dad (that  Wu Hong Da had wrongly accused Papa Jiang for money) and is devastated. 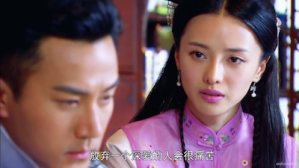 Jiang Yu recognizes the irresponsibility and the severity of what he did yesterday – he truly did put his life on the line for Cai Hong – when she’s the daughter of Wu Hong Da. He knew that Fei Fei was right, and that him and Cai Hong didn’t have a future. 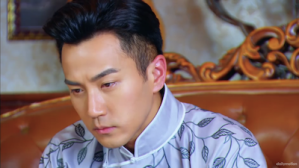 His skin though – it’s so perfect and flawless.

Shao Tian and Cai Hong arrive at the Jiang mansion to confront Jiang Yu and get back the contract. Cai Hong asks one question: Was everything just to get revenge on me?

This is especially hurtful to Cai Hong because (apparently) she has fallen for Jiang Yu now, and she thinks that he had only been so nice and caring to her just to get revenge on her. 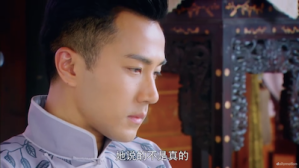 Jiang Yu stays quiet while Fei Fei prances around and confirms that Wu Hong Da had wronged Papa Jiang and they had been planning their revenge on the Wu family for the past twelve years now.

Cai Hong forces Jiang Yu to say that everything was for revenge – even taking her out to see the lotuses on the river, helping her find the murderer, and trying to cheer her up.

Finally Jiang Yu pipes up and he lies (I guess, just to end him and Cai Hong’s misunderstandings and relationships) and tells her that everything he’s done was for the sake of revenge. 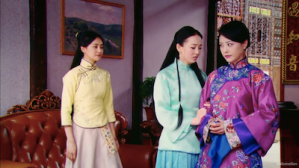 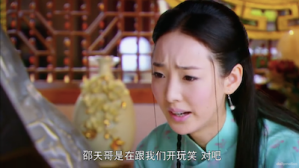 Especially Cai Yun – for some reason they styled her hair for her to look like a cockroach.

No seriously those two pieces of hair on the side of her forehead though.

Lu Man intrigues Shao Tian with the fact about the secret method of creating fabric, and how amazing it is, and so Shao Tian sets to find it.

Meanwhile Jiang Yu works very hard daily to try to distract himself with his life without Cai Hong.

He even looks cute in an apron, my god. 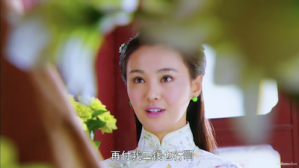 Meanwhile Cai Hong is looking for a job, but can’t find one. She wanders in the street, until she stops in front of Ling Long. 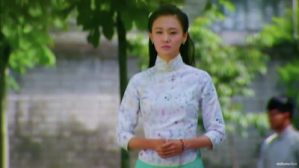 She reminisces about all about the times with Jiang Yu and how he’s just been so gentle and caring all along. 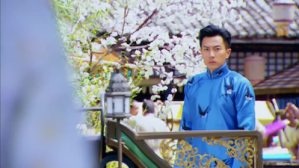 She stands outside of Ling Long and makes eye contact with Jiang Yu before he is about to step onto a carriage. He sees that she’s there, and wants to speak to her, but he forces himself on. 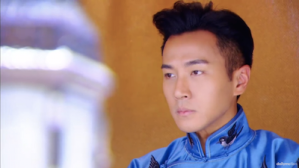 He ignores her pleas for him to stop until she falls – and he stops the carriage to run back to her. 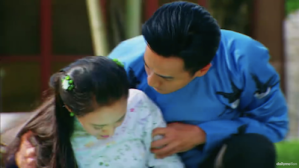 I am so in love with Hawick. 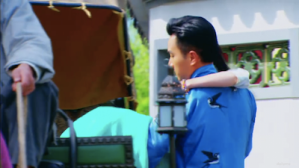 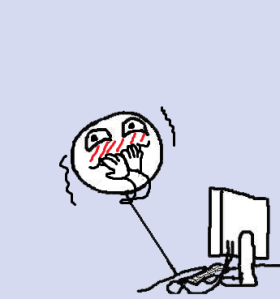 I’m seriously like a twelve year old throughout this entire scene.

Anyways, Jiang Yu picks Cai Hong up, and help her into a carriage. Cai Hong reveals that she was only chasing after him to apologize. Jiang Yu reassures her not to be silly, and that the past is behind them, but he never wants to see her again. 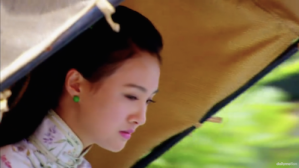 He gets the carriage to take her home alone. 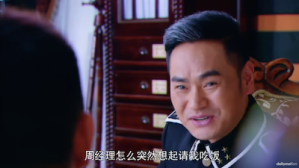 Shao Tian also finds out that Jiang Yu’s alibi is faulty. Jiang Yu had said that he was having lunch with Sergeant Li, but he actually had arrived late. 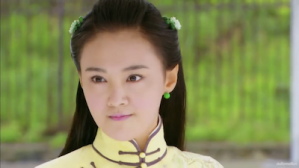 Cai Hong finds this out and confronts Jiang Yu about her father’s death yet again. Like, where have you been for the past twenty episodes? He’s obviously been proving his character to you all along. Cai Hong has the intelligence of a walnut or something because she is so easily persuaded to suspect any person. HAVE YOU NO CRITICAL THINKING, CAI HONG? 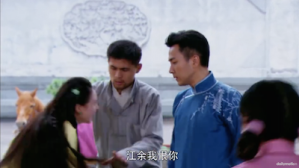 Jiang Yu, who wanted to end this unclear relationship with Cai Hong (or maybe he’s sick of her shit too, who knows) just leaves her with one sentence: “Don’t you agree that your father deserved to die?” and leaves her.

Cai Hong, who lacks the intelligence and critical thinking to analyze this phrase, immediately concludes that Jiang Yu had killed her dad.

The episode ends with Shao Tian and Cai Hong concluding that if they find the secret method on Jiang Yu, it’ll prove that he’s the murderer.

The only word I can describe this drama with is UGH at this point because it’s just moving so slow – we’re all expecting the Space Mountain Ride at Disneyland, but it seems like we got onto the Spinning Teacup ride, and we’re all bored and going around in circles. Doesn’t seem to get better in the next two episodes – but we’re halfway into the drama anyways.